5 Minutes With: Made in Thamesmead Festival

We’re pleased to announce that we will be featuring regular blogs about our clients. We work with a wide range of property owners across the country, and many of them have fascinating jobs and a huge amount of interesting experience. We’ll be asking them questions about their jobs, ongoing projects, the areas they work in and their relationship with Dot Dot Dot.

Made in Thamesmead Festival

What is your role at Peabody?

How were you involved in the Made in Thamesmead festival this year?

I managed the festival from inception to delivery in collaboration with local artist Sam Skinner.

Can you tell us a bit more about the festival? (When it started, the idea behind it etc)

This is Peabody’s second arts festival and we were keen to build on the success of last year. Earlier this year Peabody appointed Thirteen Ways, a strategic organisation combining curatorial and communications expertise, to work with us to investigate and develop Thamesmead’s distinct cultural offer.  One of the commitments from this piece of work was to hold a festival that created community-generated cultural activities that celebrate the character and culture of Thamesmead.

How did it go this year?

It was a fantastic weekend with more than 1,500 people in attendance and with over 20 events taking place to celebrate all things ‘Made in Thamesmead’.  The festival was also a chance to showcase some of Thamesmead’s most interesting places, from two packed out tours of the Grade I listed Crossness Pumping Station to the reinvention of garages into arts spaces for the Urban Room – a Thamesmead-themed exhibition – and the Garage Gala – an afternoon of activities and events taking place in garages in the Moorings area. 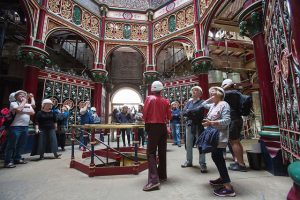 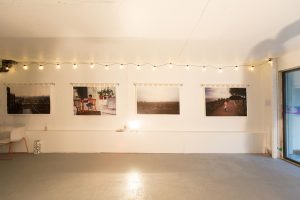 What were your highlights?

Outdoor cinema in the newly refurbished Southmere Square.  The South Thamesmead Residents Forum were keen to see the space used for outdoor films and picked the family favourite Chitty Chitty Bang Bang. A local resident and Peabody Warden shared his photographs on the big screen and we premiered a short film made by award winning director James Slater which was produced in collaboration with local young people.  Highlight was seeing the young people receive ‘Thamesmead Oscars’ for their performances.

George Charman and Jessie Brennan (Dot Dot Dot guardians) presented installations in a vacant flat.  George transformed a room into a camera obscura and Jessie presented new work including graphite rubbings of residents doormats and created a new rubbing of the exterior walls of Coralline Walk throughout the weekend.

Other highlights included a special production of the play Johnny by Thamesmead writer, actor and director Kwame Augustine and readings from local poet and former Young Poet Laureate for London shortlistee Rachel Long. 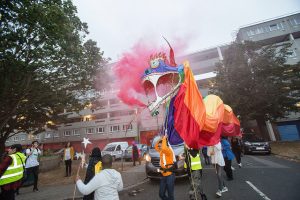 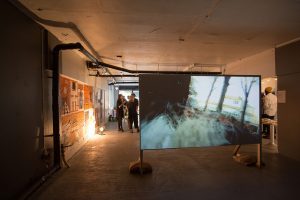 What were the challenges involved in organising the festival?

Managing a variety of venues across Thamesmead, some of which are not normal spaces for events. Such as garages!

What are your hopes for the future of the festival?

We are looking forward to building on the participatory and co-authored elements of this year’s festival.  We have made a commitment to hold an arts festival annually with 2018 being particularly special as Thamesmead will be celebrating its 50th anniversary.

What are your hopes for the future of arts in and around Thamesmead?

We are looking forward to working with the incredible amount of local talent and partnering with leading cultural organisations to develop arts in and around Thamesmead.

So thanks to Kate for this insight into a wonderful festival in Thamesmead. We’re pleased to be working in an area where the property owners we work with are so dedicated to such positive projects.

Want to move to Thamesmead and be part of the exciting changes around there? Take our Guardian Quiz.