A community in 4 days? 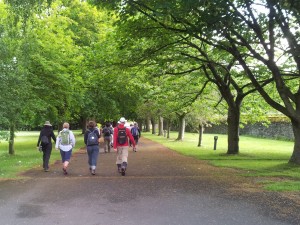 At Dot Dot Dot, we hope that by housing great volunteers we not only encourage volunteering and put empty homes to good use, but also help to create an increased sense of community among the people we house and the people they live alongside.

Over the late May bank holiday, I walked from Trafalgar Square to Canterbury on a pilgrimage, organised by The Connection at St Martin in the Fields which is a charity providing services for homeless people in London.  The route is 72 miles over 4 days – a challenge for all but the super-fit – and over 100 people take part, religious and non-religious alike.   I found it an extraordinary lesson in how quickly a genuine, if temporary, community can be created.

St Martins encourages a wide range of people to walk the pilgrimage; those who have themselves experienced homelessness and benefited from The Connection services, those who support the charity with time or money, staff, the congregation of St Martins, and anyone else with an interest in taking part in an unusual journey.  One minute you are walking alongside a power company executive, discussing  how tightly it’s advisable to do your walking boot laces,  the next, discussing international politics with a doctor in the process of claiming asylum in the UK and reliant on The Connection’s services.

Introverts were made to feel at ease.  The unfit were encouraged up hills.  Those with blisters were comforted and patched up.  Along the road, people revealed as much or as little as they wanted about their lives, their opinions, their passions, their uncertainties.  We walked through rain and sun together.  We ate together.  We slept in rows on the floors of churches and schools along the way together.  In a way that I have never experienced before, we became a community.  Not a bunch of do-gooders helping the unfortunate along their way, or enduring some hardship so they can understand what it’s “really like”.  It wasn’t a question of the weak and the strong.  There was a place for everyone.

I saw the tattooed skinhead gently making sure the shy academic didn’t feel out of place.  I saw the gobsmacked admiration of the podiatrist at the vulnerable lady determined to keep walking, despite her badly blistered feet.  I saw the grumpy Eeyore character of the group consistently making sure there was a constant flow of tea from the pot for all that wanted it, and staying up until the last person had been served to make sure everyone was OK.

I am not a religious person, but the service in Canterbury Cathedral at the end of the pilgrimage reduced me to tears.  I had had an insight into what a just and compassionate world could look like.  And I found it to be a powerful experience.