We’ve housed guardians in Shoreham-by-Sea since May, and we’re really pleased by the sense of community forming amongst them on the south coast. There’s now a full house of 15 guardians down there, and they’ve wasted no time in getting together to volunteer locally. As a group and individually they’ve been doing regular litter-picking in and around Shoreham, as well as volunteering elsewhere.

There’s a number of local beauty spots that have accrued substantial quantities of litter over time. These include the beachfront itself in Shoreham, but also nature reserves like Widewater. Fortunately, our guardians have taken it upon themselves to get out and do something about it! We’ve supplied them with some ‘stylish’ Dot Dot Dot high-vis jackets and litter-pickers. But everything else has been their own admirable initiative.

And what’s been cleaned?

Over the last 3 months our guardians have spent 101 hours in total doing litter-picking in and around Shoreham. Unfortunately we can’t estimate the weight of litter that they’ve managed to remove. But judging from the photos below it looks substantial! 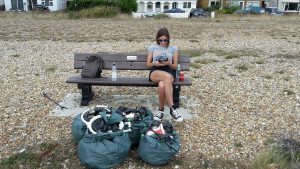 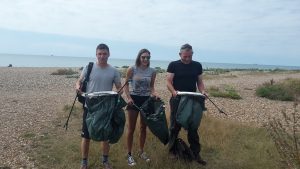 What do the guardians and the community think?

The guardians involved have found the experience very rewarding. Here’s some quotes from them:

“This is the first time I have undertaken litter picking and found it to be very satisfying to see a cleaned up beach and riverbank.”

“It has been really nice making a positive impact on the environment whilst getting to know the other guardians.” 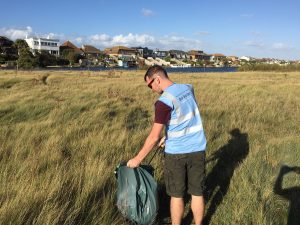 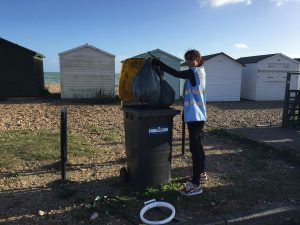 Moreover, their efforts have been met with positivity from local residents:

“When doing a litter pick at Widewater the man who owns the small café was so chuffed with our work he offered us all a free hot drink. A couple of locals approached us on the litter pick to thank us.”

“The best part of the litter picking, aside from the satisfaction of seeing a pristine section of beach and riverbank is the response from the people I have met. Now that we have our Dot Dot Dot jackets passers by are coming to talk to me and ask about the litter clearing and who Dot Dot Dot are. People are very positive and complimentary about the volunteering ethos.”

So great news and a big well done to our community of guardians down in Shoreham-by-Sea. The beaches, nature reserves and waterways of the south coast are much happier with you all there!

If following this you’re interested in being housed in Shoreham or elsewhere with Dot Dot Dot, apply now. If you’re a property owner who would like to have these kind of people in your building, get in touch.