Dot Dot Dot guardians in Abbey Wood totted up a total of 442 hours for Crossness Engines Trust in 2018. The charity was set up in 1987 to restore engines that represent a unique part of Britain’s industrial heritage and Victorian engineering. A large part of the restoration work so far has been carried out entirely by the volunteer workforce.

Dot Dot Dot guardians have taken on a range of projects – from restoring abandoned machinery and steam trains, to redecorating listed buildings and preparing architect’s drawings, they’ve done it all.

“My involvement at Crossness Engines Trust started with me signing up as a Volunteer Guide. I have catering experience and qualifications, so when the role of Catering Manager became vacant, I was asked if I could take on that role. I’ve now had the opportunity to attend conferences and become part of the Works Committee. I have been lucky to have joined Crossness at a time when it is undergoing some rather fundamental changes, the future there could be very interesting!” James, Dot Dot Dot guardian in Abbey Wood 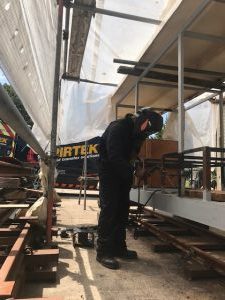 “I signed up to join the team in restoration work. So far I’ve worked on getting the locomotive ‘Busy Basil’ back into use and restoring train carriages so that a heritage railway can be brought back to life. I look forward to my Sunday mornings volunteering with the team at Crossness Engines Trust – it makes me want to volunteer as much as I can. Thanks to Dot Dot Dot for bringing that out in me.” Sulaimon, Dot Dot Dot guardian in Abbey Wood

“We are most grateful to Dot Dot Dot guardians for their regular volunteering and commitment to Crossness Engines Trust. They have been involved in a range of tasks including redecorating a grade 2 listed building and one of them taking on the role of Catering Manager. The tasks undertaken may well not be seen as glamorous but are absolutely essential!” Greg Warner, Volunteer Co-ordinator at Crossness Engines Trust

Crossness Engines Trust are currently looking for volunteer Trustees, Gardners, Restorers, an Events Coordinator and much more! If you’re interested in getting involved find out more here.