Dot Dot Do It

It’s not just our guardians who choose to volunteer. This is what staff member Sophie has to say about her time volunteering in Calais: 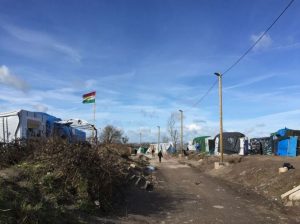 ‘Over the bank holiday weekend, I joined the hordes of people queuing at Dover ferry port to leave England. Unlike the families with cars full of picnics or young people looking for some sun, I was determined for this not to be a restful break, but a productive one.

Ever since the body of three year old Aylan Kurdi washed up on a beach in Turkey, I have watched the refugee crisis intently, and have been horrified by the conditions that people are living in. At the end of March I decided to do something and joined the masses of volunteers going to sort and pack donations in storage warehouses in Northern France.

There are a variety of grassroots organisation such as Help Refugees and Care 4 Calais who are tirelessly working to distribute donated items such as clothes, toiletries and kitchen equipment to refugees. 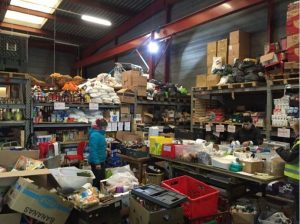 The warehouse seemed like a different world to me. The boxes, mountains of donations and high-vis jackets are a world apart from our Dot Dot Dot office.  I spent the first two days of the bank holiday sizing clothes donations, creating hygiene packs, folding tents and carrying mattresses.

As a volunteer, I quickly grew used to the pattern of life in the warehouse – packing and sorting until my hands were sore and only stopping for a delicious vegetarian lunch. I was told that volunteer turnover was astoundingly fast, and experienced this myself, with a whole variety of new and exciting people to talk to each day as I worked. 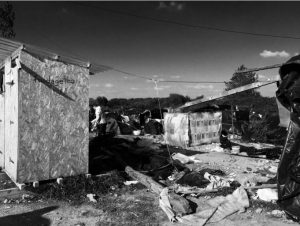 On my third and final day in Calais, I ventured into The Jungle as part of a litter picking team. Having heard about the area for months, it was still shocking to finally see it with my own eyes, especially after the partial dismantling that has occurred in recent weeks. The image that has stuck with me was the phrase ‘Free Doom’ written on the side of one of the makeshift shelters. Despite what they’ve been through, the refugees were in good spirits – laughing and joining in with our litter picking and celebrating the cricket score.

Despite arriving home on Sunday evening emotionally and physically drained, my time in Calais was very worthwhile. If you are thinking about going out there, I know that Help Refugees would appreciate any volunteers.’

(Credit to Nic Schlagman for the photos)