Down in the woods at Heathrow Airport! 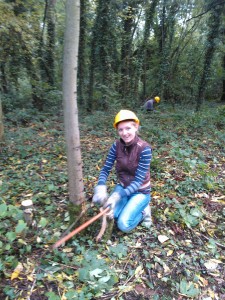 My partner Clare and I have volunteered outdoors in countries all over the place, from New Zealand to the USA to Japan, so when we returned to our native England (and my native London) we were keen to get involved doing some good for the community in which we found ourselves. Thanks to Dot Dot Dot, that community turned out to be Isleworth, right next door to some beautiful conservation areas, urban parks, and… Heathrow airport.

We’ve been working with The Conservation Volunteers for the last few months, helping with local projects like hedgelaying, clearing paths, and maintaining animal habitats. One of the ongoing projects these guys are working on is being funded by the airport authority at Heathrow. It involves clearing and landscaping a narrow strip of woodland right beside the airport, in order to control the flow of chemicals – such as antifreeze – and fuel from the airport’s runways. It’s not great that any of it drains into the woodland in the first place, but at least it won’t be draining into the river, poisoning local fish and birds, once the project is finished.

Although Winter is now well underway, there’s still so much to do – in fact, Simon who runs the group says that Winter is the BEST time to volunteer outdoors. We certainly can’t complain about the cold when we’re standing by a roaring fire, toasting marshmallows. You can’t get a better lunchbreak than that! 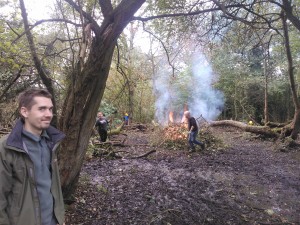 We were also excited to be a part of Foodcycle Wandsworth’s second-ever meetup. It’s early days for this new South-West London hub – and a permanent venue hasn’t been settled on yet – but with the energy and enthusiasm of organisers Kemi and Emily, it looks destined to be a great success. You’ve probably already heard about the ingenious yet simple idea behind Foodcycle: collecting rejected and leftover food from local supermarkets and other businesses, and using it to prepare a big hot meal for people in the local community most at risk of food poverty and/or social isolation. Much like Dot Dot Dot, this initiative ties together two big issues in the modern city, and uses one to alleviate the other. 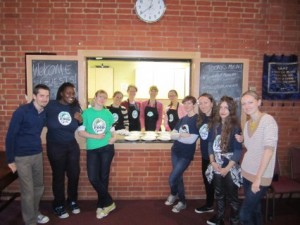