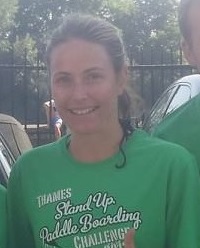 We think Taryn is dead special for all the things she has thrown herself into since joining Dot Dot Dot – so we’re showering her with praise this month! She’s a great example of a guardian that couldn’t previously do too much volunteering, but now with the opportunity of affordable accommodation has truly seized the occasion.

Taryn says: “I was working during the week, then after the weekend, the same week would begin again, and that’s all I was doing. Chasing to pay rent and survive. I heard about Dot Dot Dot and the concept of being a guardian in flats and getting involved in volunteering – and knew that was my calling and something I would love to be part of. I waited and then a vacancy came up in West is Best London ;). I moved in and from then whenever I heard there was an event where they needed help I jumped!

Since then I’ve been involved in Rollerdome All Skate and Envision which I love and am very lucky to be part of. I’ve also been involved in Waves4Change paddleboarding and raising money for Cancer by donating a free haircut. I really love Dot Dot Dot’s concept of being part of the community and It allows me be to be part of amazing Guardian adventures and meeting amazing people who are connected to awesome charities. I’ve always admired people that were involved in charities – and now I am!”.