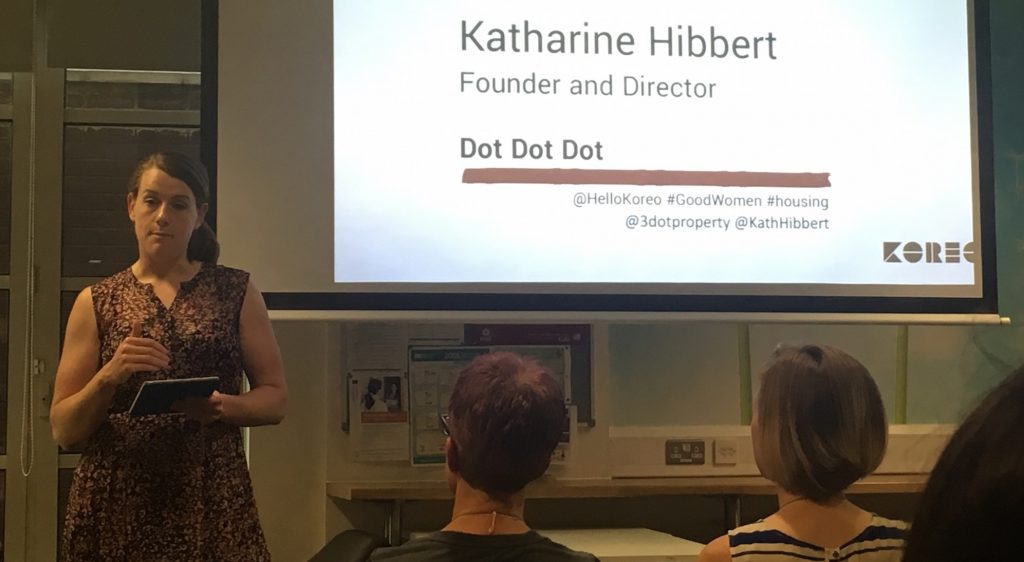 The impact of the housing crisis on civil society

Here’s a summary of a talk on the harm the housing crisis does to civil society given by our founder Katharine Hibbert at a ‘Good Women’ event hosted at Notting Hill Housing and organised by Koreo.

At Dot Dot Dot, we are keenly aware of the harm that the housing crisis is doing to individuals – every day, we meet people who’re unable to fulfil their potential because of the high cost of living. We also see the damage it’s doing to businesses and economy – the FT quoted us in an article on the subject. But we also see the negative impact it has on civil society.

Everyone benefits from living in an environment where people help each other out, give their time to good causes, and contribute to the friendship groups, clubs, societies, neighbourhoods and communities that they are part of – without people pitching in to help, less can happen. You have fewer sports events and children’s parties; litter doesn’t get picked up and fewer bulbs are planted; fewer children are mentored and fewer older people get visitors.

And most people would really like to do their bit – it might be through what we classically think of as volunteering, by providing first aid for St John’s Ambulance or answering the phones at the Samaritans, or it might be something a bit closer to home, like helping out at their children’s Scout pack, or hosting a reading group. These things are often fun, they’re a good way to socialise, and it’s nice to feel like you’re making a difference – there are loads of incentives for people to do them alongside pure benevolence.

But as things are at the moment, high housing costs are pushing people to work harder and longer, and to commute further. So it’s no wonder if many get to the end of the day and don’t feeling like doing anything much for the common good. If you’ve spent a long day at the office, and travelled there and back, by the time you’ve had something to eat, seen those closest to you and maybe had some exercise or done some laundry, you’re probably finished. Plenty of people do manage to do more, despite the pressure on their time, but it isn’t easy.

And the instability of the private rented sector also erodes people’s motivations to get involved locally. If you might have to move house at two months’ notice, is it really worth planting things in the community garden or helping to set up a kids’ football team if you may not be there to see the results? Again, many people do give time generously despite knowing that they may not be around to benefit, but the circumstances don’t help. We know that tenants in the private rented sector are the least likely to register to vote, and who can blame them when it’s yet another chore to sort out along with the electricity and the internet every time they move house.

Plus, if we create an environment where people feel that society isn’t doing much for them – which isn’t entirely unreasonable if you’re locked out of home ownership and social housing – then perhaps we shouldn’t expect them to give much back.

That’s why we’re trying to do something different at Dot Dot Dot. We’re a property guardian company, so we can house people for a fraction of the normal rent by placing them in buildings that would otherwise be empty on behalf of the building’s owners. Because of their role as caretakers, we need to house people who are resourceful and resilient, rather than the most vulnerable, so we choose to house people who want to use their time to make a difference.

By reducing their cost of living and supporting, encouraging and – sometimes! – chivvying them to volunteer, we get them started with projects that excite them and which make a real difference for people who need it the most.

We’ve seen what a difference this makes to our guardians.

We know that the housing we offer isn’t the most stable – guardians are there to look after the buildings they’re in, so when the owners need them back they have to move on – often to another building we manage, but sometimes to somewhere else.

But what we’ve shown is that inexpensive housing, plus positive management, and support and encouragement to volunteer, really does unlock people’s time and energy. Last year, our guardians gave 56,000 hours to almost 1000 good causes – that’s the equivalent of 30 working years for charity. That helped a lot of individuals, but it also built up neighbourhoods, communities and society as a whole.

So what do we do about this problem more generally?

Well, at Dot Dot Dot we’re going to carry on working to scale up – to manage more empty homes and to house and support more brilliant people. But beyond this, we would like to see a wider acknowledgement that the impact of the housing crisis goes way beyond the effect it has on those at the sharp end of it. If those who didn’t buy before prices exploded, and who can’t get social housing, are crippled by high rents or mortgages, then we will all lose out, so it’s in all of our interests to solve this.