Jasmine Morris on Volunteering with GoodGym

“Running’s pointless. All you do is start at one point and run in a big circle until you are back where you began.”

I can’t tell you how many times I have heard this, most of the time given as an excuse from people who don’t want to run and see no value in it. And I must admit at times I feel the same which is why GoodGym is a great incentive! 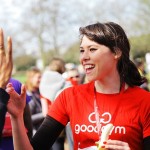 In short, GoodGym takes groups of people who want to run and gathers them all in one place on a weekly basis.From that meeting place everyone runs together to a local community organisation or project which needs volunteers for a short amount of time.

The runners run in, get the job done and then run away again, back to where they started.

I have been going to GoodGym (almost) every week since Christmas and the range of activities and community organisations I have gotten to know over that time has been fantastic – one week I could be turning compost on Stepney City Farm to painting the inside of a local Church. I must admit there has been A LOT of poo shovelling and compost turning and although it is smelly work it is something I wouldn’t have a chance to experience if I was running for hours on a treadmill staring at a wall in my local gym.

But GoodGym is even more than this; they also match runners up to local older people who could do with a bit of company. The idea is that you run to your GoodGym coach (older person) have a chat and run away again. Seeing my GoodGym coach, Veronica, is always the highlight of my week. She gets me out there for a run even when it is the last thing I want to do because I know that she is waiting to see me. We get the chance to chat about everything from how gorgeous George Clooney is to the lack of local pubs and the subsequent breakdown of community!

So, there you have it, running doesn’t have to be pointless!

If you would like to come along to a GoodGym run just drop in to any session, they run from different areas on different nights – Monday = Tower Hamlets, Tuesday = Hackney and Wednesday = Camden.