Litter-ally the highlight of my week… 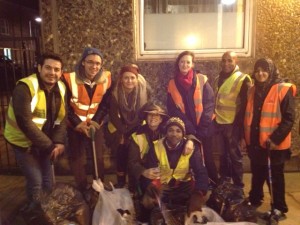 If someone had told me a year ago that spending an evening once a week picking up rubbish would have been a highlight of my week I would have thought they were having a laugh. However low and behold, week on week countless guardians, local residents, and myself would get together braving all weather in an effort to make our local areas look a little nicer. Why you ask? Well this is a good question as it is not just because we had a burning desire to pick up chicken bones and crisp packets!

There are a number of reasons why this was such a successful project and I suspect that these factors can be attributed to many other projects as well. Firstly, it was fun! It was a couple of hours each week where you could chat, laugh and get to know your neighbours a bit better. Also attending one of the litter picking sessions provided an easy way of meeting up with people that did not have to planned meticulously and put in the diary weeks before. It was a known time each week that anyone could come along to depending on their work and other social commitments – it was easy. 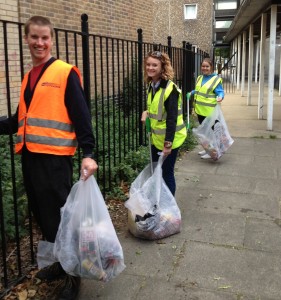 The litter picking couldn’t have actually been able to take place if it weren’t for a grant that was given to the guardian litter picking groups from Capital CleanUp. These provided the groups with hi-vis vests, litter pickers and bag holders. A key importance of this is that it was the guardians themselves that applied for these and thus took ownership of them – it was not a case of Dot Dot Dot ‘giving’ the groups these things [assistance was provided though when needed]. As with any project, without the group’s ownership of it there is no hope for it to be self-sufficient. On top of this, having a few dedicated litter picking heroes who took a more leading role in orchestrating the clean-ups was a real plus too. They were always there week on week and helped to remind people who may have forgotten, they would also take care of the equipment during the week. 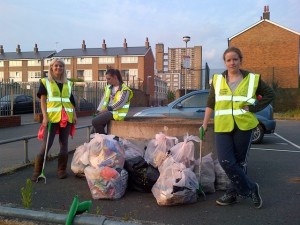 I believe another reason why litter picking worked so well as a project is the visible nature of it. Not only is there a noticeable difference to the look and feel of the area after people have been litter picking, but also with the hi-vis vests the groups themselves are visible. People would come up all the time and ask all sorts of questions about why and what we were doing – some people would go out of their way just to say thanks! It provided an amazing way to spark up conversation with your neighbours that may not have happened before, and after that initial spark you would then start to recognise people more and say hello each time you saw them.

All in all the litter picking projects have proven to be absolutely fantastic ways in which guardians have been able to get involved more in their community, do great volunteering and generally be fabulous. So next time someone suggests something that doesn’t sound too appealing, saying yes might just be the best decision you can make!