One of the most notable things that has hit me during my time in London is how on earth it is possible that in a city, so big and so full of people, it is easy – too easy – to feel alone. It makes me sure that all of us have, at one time or another, had this feeling, yet the rich stories of neighbourliness that I hear of from friends and family, guardians, tales online and colleagues reassure me that all it takes is one extension of an olive branch and every one of these feelings will just float away.

The Edible Bus Stop started in South London when residents objected to the proposal of new houses being built on an open site in the area where a WW2 bomb had hit. They suggested to neighbours that they instead rode on the wave of the guerrilla gardening projects that had been popping up over the years and created a community garden on the plot, tending to the land themselves. The residents clubbed together, and “skills were shared, smiles exchanged and the original Edible Bus Stop had germinated.” Now this community has a team achievement tying them together inextricably, and on top of that – a plot of land to enjoy and tend to.

Neighbourly interactions needn’t necessarily involve planning permission and concrete plans; Streetbank enables you to borrow and share anything and everything with your neighbours. It’s a sunny Saturday and suddenly you notice just how much the lawn needs a mow. Never fear – once signed up with Streetbank there’s a high chance you will find a lawn mower to borrow within 1km of your house. You want to start this new knitting pattern for baby hats but your needles are all too big for such delicate a wool? Have a look on Streetbank and a friendly neighbour may be able to set you on your way. With up to 37,000 members, Streetbank has the capacity to do exactly what it sets out to do, to work “to create a worldwide sharing movement”. Yet the beauty of it all is the chance to get to know neighbours within metres of your home, who you may have otherwise never had the opportunity to speak to. This can go miles to personalising the potentially impersonal mass that London can all too easily be.

Our guardian, Alexandra, through Streetbank and their partnership with Higgidy, was given the opportunity to hold her own ‘Streetie-Pie Party’, bringing Robin Hood Gardens’ neighbours together for an afternoon community get-together over a hearty pie – there can’t be many better ways to get to know your neighbours! What we heard back from Alexandra about the event itself was brilliant: “The party went really well. The weather was wonderful and although almost no guardians were able to make it, lots of “real” residents stopped by. They all liked the food and had a go at hula hooping as well. It was wonderful to be able to chat to some of them and to hear some of their stories. Most of them also took some food home and I distributed some more around the estate afterwards.” 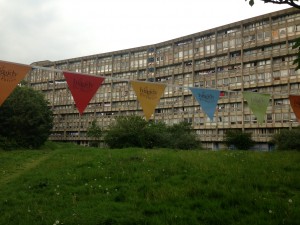 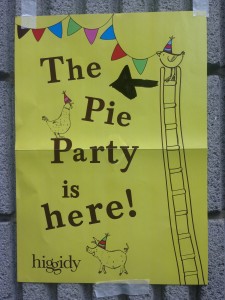 When Dot Dot Dot moved offices to Toynbee Hall we needed painting equipment to transform our new office into the blank canvas we needed it to be. Lizzie browsed the posts on Streetbank, and upon finding someone offering what we needed she got in touch with them and we found ourselves with the majority of rollers, brushes, trays and ladders that we needed, all handed over by a friendly fellow Streetbank-er in the vicinity. Upon realising, the day before the Big Paint Day, that a few more brushes wouldn’t go amiss, our very own guardians, Fabian, Ciaran, Jan and Jasper were able to save the day and offer us some of their great neighbourliness with a few more rollers, brushes and trays. Our office wouldn’t look half as good without so many great neighbours around!

The best thing about being a good neighbour is that you don’t even need to be part of a scheme to make it happen. Lizzie was putting her rubbish out once and her neighbour popped out and offered her a bike helmet that she would otherwise be getting rid of. Now Remi has a bike helmet and there’s less landfill – everyone’s a winner! Some neighbours walk each other’s dogs when the owner is away, perhaps they feed the cats, drop each other to the station or airport when possible, or field deliveries that need signing for. All of these small gestures can make massive changes to the way we live and, even more than that, the way we feel as Londoners. I make sure I read the ‘Good Deed Feed’ in the Metro on my way to work – if I’m running out of time it is where I always skip to – as there’s nothing that cheers me up much more than hearing about a selfless friendly gesture to a neighbour or stranger: a fellow human being.

Another Guardian, Lawrence, has started his own initiative making use of the raised beds at Robin Hood Gardens – not only will this visually enrich the lives of his neighbours with bountiful beds rather than sparse ones, but Lawrence is hoping it will lead inspired neighbours to get stuck in themselves, creating interactions between them all and a real sense of community. Read all about his green fingers here in his blog.

The best way to surmise the importance of involving yourselves with those in your immediate vicinity, for the sake not only of your own sanity and safety but to preserve the compassion and humanity that we are blessed with, is a message from Mother Teresa – some real food for thought: “I want you to be concerned about your next door neighbour. Do you know your next door neighbour?”