Making a Space a Home in Thamesmead

This is the latest in our series of blogs entitled ‘Making a Space a Home’. In this series we look at how guardians have transformed empty spaces into homely homes! This week we talk to Martin and Carmen. They moved into a Dot Dot Dot property in Thamesmead in July, and have transformed their flat into a lovely home. We interviewed them about that process.

We are Martin, a senior electrician from the Lake District, and Carmen, a sustainability graduate from Transylvania. Having met in London over 4 years ago, we moved away for a while and went traveling as well and now we are back in the ‘big smoke’ (maybe smog actually).

Tell us about the area you live in.

Now we live in Thamesmead. Yes, we didn’t really know where that was either but, after viewing the area, we were excited to actually live in one of many ‘cities of the future’ built in the 60s. They don’t necessarily have the best reputation in the UK but we are quite taken with the available green space, the Thames Path, the Lesnes Abbey and the forest around it, not to mention probably the fanciest sewage works around – Crossness Pumping Station.

What was the flat like when you took it on?

We were really quite lucky as the flat had recently been renovated. But the floors weren’t the best; a combination of bad lino and a ‘furry’ floor in the living room. Which was basically the remains of the lino being taken up following, what we found out later from our neighbours, a fire in the flat. However, we had some rescued carpet tiles from an office that no longer needed them which cover most of the flat.

For the rest of the furniture, we had a rummage through the family barn and rescued an armchair (below), a table and a sofa. A bit of elbow grease, sanding paper and paint (rescued from the barn as well) had given them a new lease of life and, we think, they fit in quite well with the age of the building. Our bed (see below) was made by Martin from pallets and our cooker came from one of our fellow guardians. 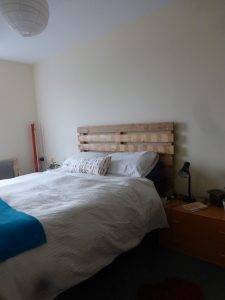 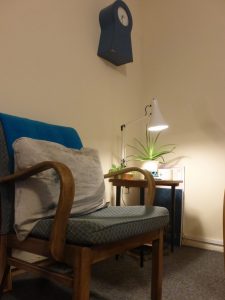 How did you find your furniture?

We have a side project – Cycletricity – where we use pedal power to make electricity to run cinemas, sound system and other contraptions aimed at education people around energy issue. But that also means that we have a fair bit of stuff so we tried to integrate it into the house. So speakers became a coffee table and the ‘lightbulb challenge’ becomes a lamp.

We still needed some white goods as we have ours away when we went traveling so we went on good old Gumtree and got ourselves a washing machine and a fridge for under £100. But you could pick them up for free as well on sites like Freecycle or freelywheely or, obviously, from your neighbours. Also, there are loads of charity shops that sell furniture and white goods and some of them deliver as well. 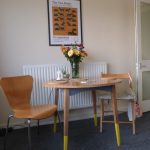 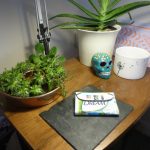 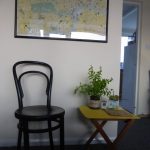 What’s been the most difficult part of making it a home?

Moving time and time again can get quite tiring… in more ways than one. All the packing and supporting and all the decisions can get too much and somehow you still end up with unopened boxes 3 months down the line after moving. However, we still love making a place home, regardless if it is an office, old people’s home or school so having an actual flat is not, well, that challenging.

As a guardian you do have to get used to thinking outside the box and making the best of the space you have and there’s always that balance to strike between how much time and money you put into a place that you might not get to call home for too long. Hence even more the reason to reuse, recycle and upcycle as much as possible!

What are you looking forward to in your future as a Dot Dot Dot guardian?

We look forward to discovering the area even more and maybe starting a project around food growing and/or food waste. By the way, you probably saw the volunteering opportunities newsletter: FareShare really need some volunteers right now, especially people able to drive a van during the day.