This is the second part of our blog series about Nigel, our DIY superstar in the Thamesmead / Abbey Wood area. In the first part he guided us through how he made his kitchen more homely and appealing at low cost. This time round he’ll be writing about how he made his living room ‘a different space entirely – warm, inviting and homely’.

The following week I finished work for the week on the Thursday morning at 7am. I drove straight to the flat via B&Q where they had laminate flooring on offer throughout their January sale. With basic flooring at £5.00 per square mtr, I estimated i would need 7 packs at £12 per pack total cost £84.00. After lugging this from the car to the lift then up the final flight of stairs and into the flat, I made a start on painting the walls in the living room.

This time I used Leyland Trade Matt Pure Brilliant White paint purchased from Screwfix at £19.99 for a 10Ltr Tub. This was beautiful to work with, as you can see from the pictures below. 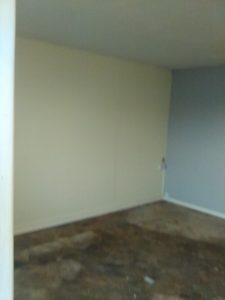 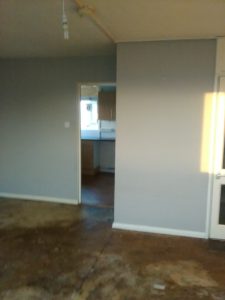 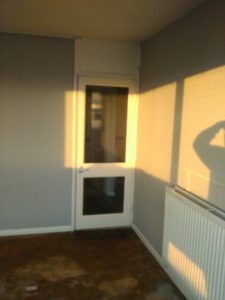 Once again using a smaller brush to pick out the edges I was ready to get the larger roller on the walls and within 3 hours had given 3 of the walls and the ceiling their first coat of paint. 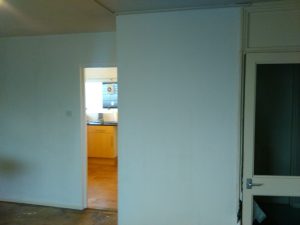 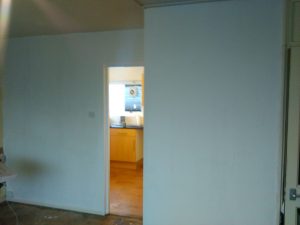 Whilst allowing this first coat to soak in and dry, I made a start on glossing the skirting boards and the door and windows leading to the balcony. The gloss was also Leyland Non Drip Pure Brilliant White Trade paint, costing £16.99 for 2.5ltr tin.
After picking out the edges with a smaller brush, I then set to filling in the larger areas with a roller. I find that using a fibre roller rather than a sponge roller gives a smoother finish, but they soon disintegrate, so make sure you have plenty of spares. You can get a 5 pack from Poundland. 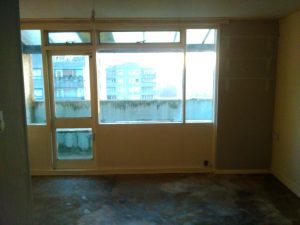 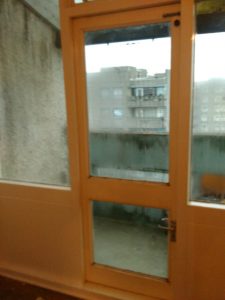 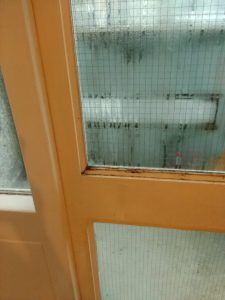 As the daylight began fade rapidly, I had to bring in more lamps to help me see what I was doing. I found this actually highlighted areas that had previously been missed on the walls and ceiling. Being able to control my own shadows therefore enabled me to give all the emulsioning a second and final coat of paint, which you can see below. 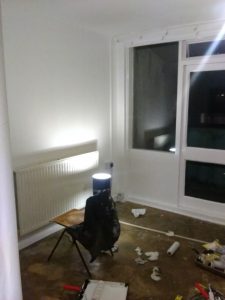 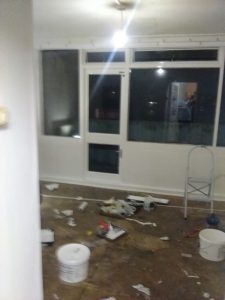 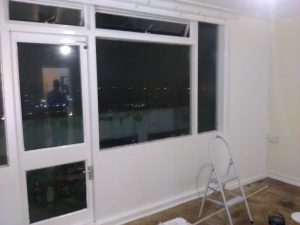 This room was completed in 10 hours excluding the back feature wall and adding a few tea breaks in between. By 8:30 pm the smell of paint and aching arms called for a drink or 3. Having been awake 23 hours by this stage it was definitely time to call it a day!

On Friday I woke up at 8am, admired the work and inspected for any missed patches whilst making a cuppa. Now I had the bug to get things going I cut in the edges on the feature wall and within 2 hours this wall was finished. This only took 1 generous coat. The paint was part of Wickes ‘Colour at Home’ range and the most expensive of all the paint purchased at £16.99 for 2.5ltr tin. 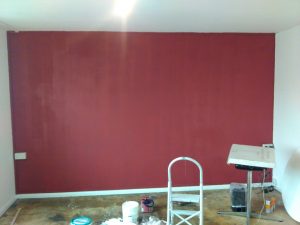 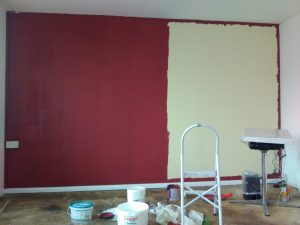 My friend arrived at 11am all dressed up ready to do some painting, but I had already done that, so she asked me what needed doing. I said I had a clock that needed putting up (below). I had originally bought this for my room where I was living previously, but never got the opportunity to put it up. Whilst the clock was being mounted, I concentrated on the curtain track and curtains. These cost £14.99 from Wilko and were long enough to do living room and bedroom windows. 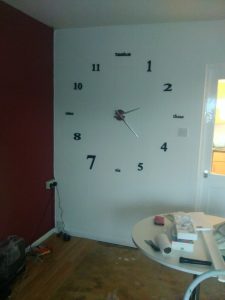 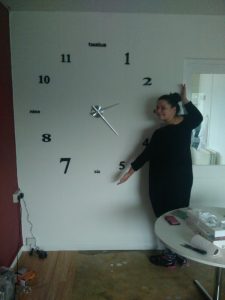 As the clock (available online approx £12.00 inc delivery) was being completed, I made a start on the flooring. As previously mentioned the total cost for the flooring was £84.00. That is less than half the cost that I would have had to shell out on carpet if i was to cover the entire living room floor. After a couple of tea breaks and approximately 3 hours later, the whole room had began to take shape and became a different space entirely; it was warm, inviting and homely. 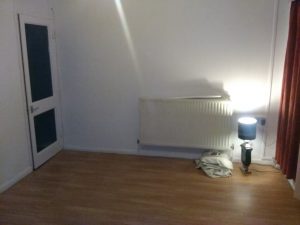 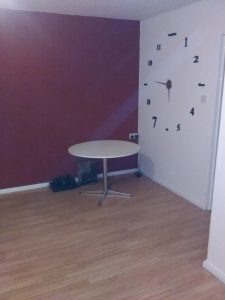 With the addition of curtains, and over time some furniture and soft furnishings, slowly it became home. I look forward to coming in from work and adding little touches like lighting where I’m able to change the mood of the room. 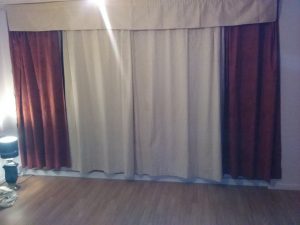 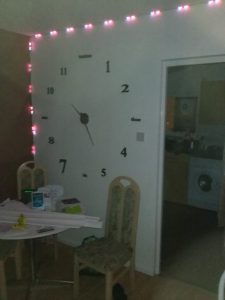 Next Time – A Hallway

Thanks again to Nigel for leading us on this DIY adventure! Hopefully you’ve learned something about how to redecorate a living room. Next time we’ll be looking at the piece of DIY he’s most proud of – his hallway.

If this post has inspired you to want to live near Nigel in Thamesmead/Abbey Wood, check out our availability and apply now!