A huge thank you to all the guardians, neighbours, housing association staff and Dot Dot Dot supporters who came to our summer party at Anderson House last night. I think it’s safe to say that it was a total success. We had guardians there from all the Dot Dot Dot postcodes as well as everyone from the office and lots of people who’ve helped us along the way, and the delicious food was provided by FoodCycle, a charity that combines volunteers, surplus food and spare kitchen spaces to create tasty, nutritious meals for people at risk of food poverty and social isolation, as well as running cafes and events catering. 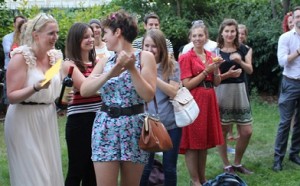 A big well done to Polly who was voted ‘Guardians’ Guardian’ for the contribution she’s made to bringing guardians together for pub trips and socials, and also to Dan Settatree who was under our Guardian Spotlight this month. 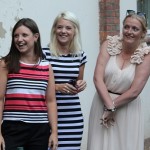 We heard from some of the Guardians about their current projects. Rosie, Jess and Polly told us about the litter picking project they’ve set up with help from Cleanup UK that is making a real difference to the area around the flats they live in, and Laurence told us about his brilliant plans to compost food waste at Anderson House. Unfortunately the special composting worms he ordered hadn’t arrived yet (and are still somewhere in the postal system, hopefully not lost) so we’re looking forward to the next update. 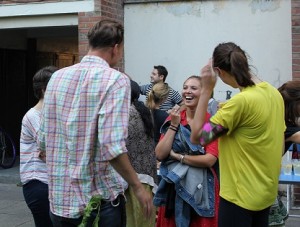 It was absolutely great to have such a good turn out and it was really lovely for the Dot Dot Dot team (especially me, Ben and Jessica being so new) to be able to put faces to names and hear first-hand about the projects everyone is working on. 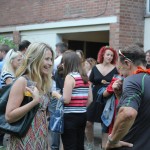 All in all, an excellent party. Bring on the next one!