Putting on a good HouseParty

Last week Ben and I were in Manchester helping make HouseParty happen. HouseParty was an ‘unconference’ and with some 250 people registered to turn up over two days it promised to be an interesting and brave experiment in running an event where ideas could be had, innovations discussed and collaborations begun. And a fair amount of fun was promised too.

The organisers HACT and the Social Change Agency described HouseParty as “(a place to) showcase the best in housing and civic innovation … bringing together the widest possible collaborators of grass roots housing and social change makers to explore and solve some of the most pressing needs in UK housing”. You can read more on Esther Foreman’s (Social Change Agency) blog about the reasons why she believed the time was right for a new kind of event to discuss housing’s challenges (and successes).

Dot Dot Dot was invited to HouseParty to co-ordinate the volunteering that was needed for the event to happen. We liked that we could support such an interesting and innovative event:

–       HouseParty is the type of event which fits with the way we like to do things: to challenge existing ways of doing things (in this case how to run a conference) and to shake things up. We’ve always believed for example that empty properties should be put to good use – both to house people and in turn using that housing to allow people to do great volunteering.

–       We liked that we could support the event in a practical way. Some organisations gave cash, others had sponsored the t-shirts and the lunch. We enjoyed rolling our sleeves up for two days and helping make it happen by organsing the volunteering efforts – all of these contributions were needed to support an event that was big in aspirations but small in budget.

–       Dot Dot Dot itself had housing experiences to contribute and a tonne of questions to ask others working in the housing sector. Dot Dot Dot works with some really great housing association clients, many of whom were represented at HouseParty, and many of Dot Dot Dot’s property guardians are based in areas undergoing change and renewal. We loved chatting this through with people and exploring our own reflections on operating in communities that are in transition and creating social impact in a time of change and regeneration.

HouseParty was happening at the same time as the much larger housing conference organised by the CIH located just a few minutes’ walk away. We spotted a fair number of people wandering in and out of both events, and in the local coffee shops could be seen people wearing both types of event lanyard (with some people sporting both at once!). A number of bloggers have written in the last few days comparing the two events (for example, Paul Taylor of Bromford Housing, and Rob Gershon) 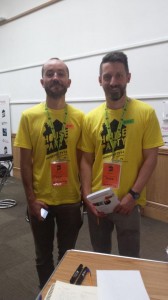 When we agreed to help out at the end of May we weren’t really sure exactly what would happen. The venue was booked, a programme was in the midst of being created, Esther Foreman (Social Change Agency) and Matt Leach (HACT) were busy asking for donations and help. What we recognised was lots of energy, passion and a fair degree of bravery in trying out a new format. The aim was an event that appealed to a bunch of innovative and inquisitive housing professionals, most of whom had never been to a ‘big’ conference, and wouldn’t have the budget to be able to do so even if it appealed. Then all of a sudden HouseParty sold out of all tickets – almost entirely via twitter and social media activity – and by then we knew we had gotten involved with something special. Whilst at the ‘big’ conference up the road, participants were in plenary sessions hearing from politicians and commentators, HouseParty attendees were in smaller sessions listening, discussing, contributing and building new ideas. Some of the more creative sessions involved balloons, cupcakes, embroidery and confessions (you’ll have to ask someone who was there…). I certainly found the event and the participants endlessly interesting and the event challenged my thinking about housing and many of the contemporary issues in the sector, as well as highlighting a few issues that just aren’t spoken about in the regular debates. I left Manchester a curious mix of both exhausted and energised, and with a bunch of people to follow up with and loads of ideas to mull over.

As a social business which has volunteering woven into its DNA, it was great to be asked to give our skills and time in a way that helped the party happen. Thanks too to the brilliant bunch of volunteers that gave their time and energy. Roll on HouseParty 2015!