Josh became a guardian with us in early 2015 and has moved between 3 different properties in this time. His volunteering experience ranges from fundraising for WarChild at a festival to responding to emails from people with drug-related concerns with DrugScience. Here he talks about his latest venture:

Volunteering close to your home isn’t just convenient; it helps you feel connected to your neighbourhood. I can hop on my bike and within 10 minutes be elbow-deep in compost, planting veg in the Lincoln Community Garden. It takes the same amount of time to arrive at Bow Locks (where Limehouse Cut meets the River Lea), where I put on a life-jacket and get stuck in to one of the more unusual volunteering activities I’ve tried: Eel Monitoring.

It’s a tough job, but someone’s got to do it. Eels escaping London’s waterways and entering the sewerage system need monitoring due to an unexplained 400% surge in toilet-emergence incidents. Their instinct to migrate upstream is unstoppable. I try to grab them as they enter the sewer overflow pipe but they are strong and slippery and I can only wrestle 4 or 5 at once.

In reality, I meet up with another eel monitoring volunteer and we record the sizes and numbers of elvers (baby eels, transparent and about finger-length) that come through Bow Locks as they migrate to find homes upstream. The project is run by the Zoological Society of London, with volunteers coordinated by Thames 21. 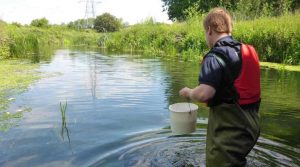 Eels are the giant pandas of East London. They’re critically endangered, having plummeted 95% of the way to extinction in a couple of decades. I could probably struggle on in a pandaless world, but it’d be tragic to lose the European eel. They are incredible. Each elver I measure hatched in the Sargasso sea and swam from the West Atlantic to the East End. After our encounter, they head on upstream, and could be as old as I am before they return through Bow Locks as metre-long adults. They’ll head back to the Sargasso sea, breed, and die.

Dot Dot Dot helps people like me hang on in London, it’s satisfying to help eels do the same.